In 2001 at the International Woodcarvers' Congress in Davenport, Iowa I took a class with Neal Cox , A Study in Portrait Carving. The class was 3 days long and I learned a lot from it. Neil had us take black and white photos of ourselves (or whatever our subject was to be) from both sides, front, and top. We had to then make them life-sized before the class. These were my photos: 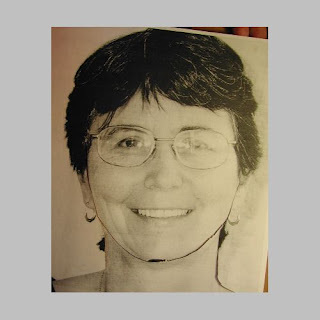 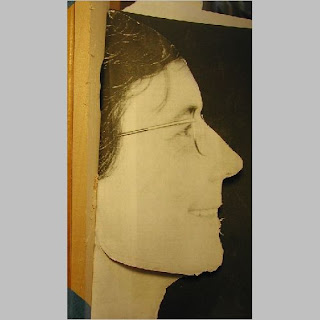 The first day we used the 2 pounds of modeling clay we had brought with us to make a manquette or mock-up of our projects. The idea for that is because it it a lot easier to change something in clay than it is in wood- so make your mistakes and correct them in clay first.
Neil helped us to get them right and by the end of that day I thought my model looked a lot like me: 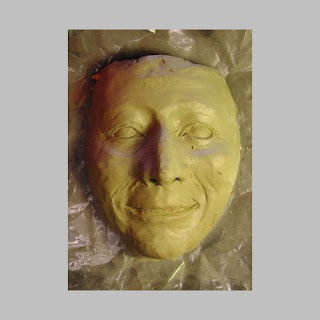 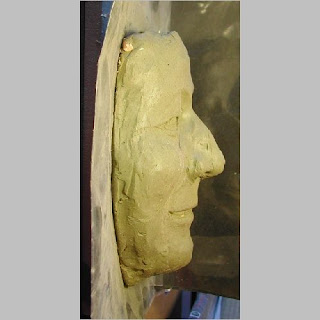 Overnight Neil took our photos and made blanks for us to use. He just followed the outlines for both views. Then he attached a 2" x 2" piece of wood to the back with 2 screws so that we could mount the project in vices. In the morning we had the blanks ready to go. Since I didn't take any in progress photos I cannot show you what we did, but I can tell you that he did a good job of showing us how to block out the planes of the face that first day. On the third day we had many demos for how to shape individual features, and we did our best to get the projects as far done s possible. This is how mine looked after the class: 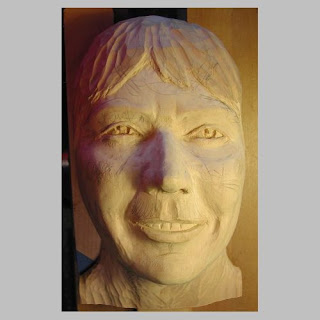 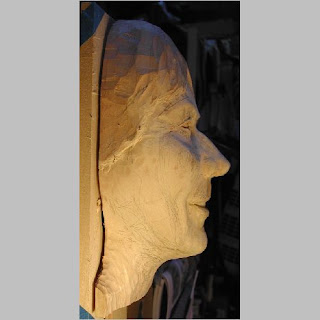 I cannot say that I was very pleased with the result. It didn't look at all like me, especially the frontal view. Neil had done one of the eyes, and I had tried to copy his work, but the results were not to my liking. Near the end of our time together I remember Neil saying that we had enough wood on our projects that we could 'push them back' and still have plenty of wood to work with. I realize now that it was his polite way of saying that we still had a long way to go, and that we should refine the form before we did any more detail work.
I put the project on a shelf in the studio for 7 years and then decided that I should finish the project- either ruin it completely or improve it. I was older now- though not necessarily any wiser- and my face was changing by the day. It was now or never. Besides, I'd gotten another 7 years of carving experience under my belt so maybe I could do a better job now. I've carved many animals with some success, but the human animal could prove to be a lot more difficult.

November, 2008
The first thing I did was to look for reference material in my bookshelves. The best one for my needs was Ian Norbury's 'Fundamentals of Figure Carving'. I think he is the best carver of humans, so he would be a good one to emulate. I had his face carving pages in front of me for this entire project. I could see right off that I needed to lower a lot of the levels on the carving to make them look like his model. This is what it looked like after some brutal wood removal: 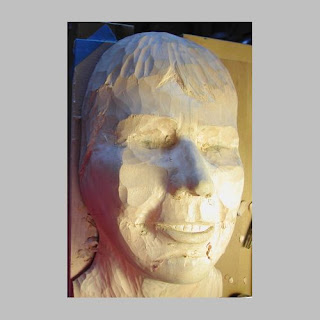 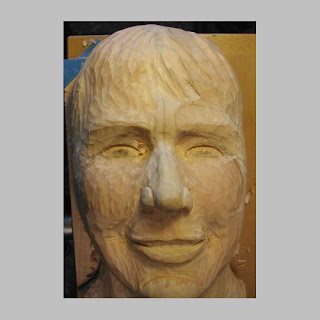 The photo on the left was the result of 'pushing back' the front planes to where they needed to be. I thought the cheeks were much too prominent- but later determined that on a smiling subject with high cheekbones they should have been left a little bit higher.
The photo on the right is after rounding the flat surfaces and starting to relocate the eyes.


So I worked some more on refining some details and adding more 'character lines'- i.e., wrinkles. I had one other reference of myself- a ceramic casting of my face that hubby and I made when I was just 30 years old- in 1976! We had made a plaster negative first, and then the mask out of fire-able clay, and then fired it. The firing made it smaller than life sized, but it was a good likeness:

In retrospect this was probably not a good idea. I was using too many disparate references. The reference book was using a young man and woman for a model, and I was using the mask from when I was 30 and photos from when I was 55 years old, as well as looking in the mirror to check how I look now- a discouraging task indeed at 62. I would put in some lines while focusing on one reference, and then take them off. At this rate I soon wouldn't have any wood left.

It was starting to look more like me though, so I kept going: 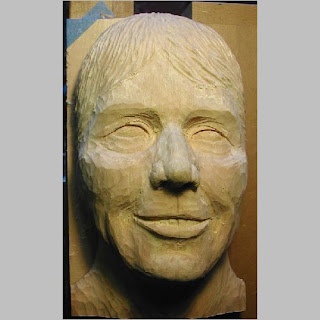 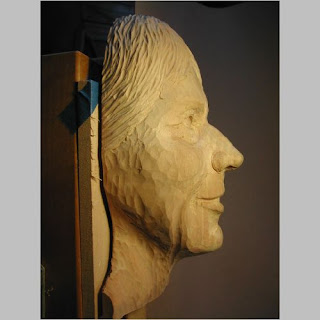 It wasn't there yet though I couldn't for the life of me determine what I should do next. Hubby to the rescue. He suggested that he take some pictures of me and the carving side-by-side for comparison. This seemed like a good idea so we did that: 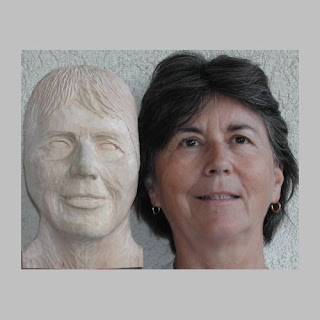 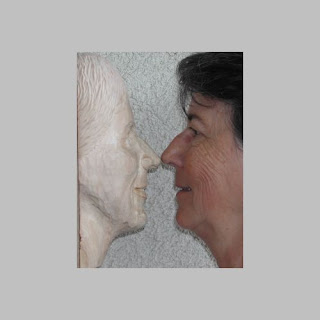 I drew lines on the print outs to line up the details of the features so that I could compare them item by item. I found some major discrepancies. The major one was that the brow line was too prominent and much too low. Time to get out the big gouge and shape that puppy up. The other biggie was that my teeth needed to be pushed way back and the dental arch increased so that the teeth were only visible in the center. Tiny gouges to the rescue. I also need to narrow the temple area quite a bit, and I've decided to remove the wings on the side of the neck because they are distracting and just wouldn't show up in that section of the body.
A few more hours- actually a full day's work- and a lot of sore muscles- and this is the result: 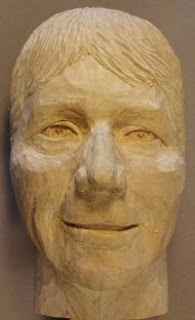 After looking at these new photos I realize that I'm not ready to start sanding like I thought. The side view shows that the eyes need to curve around the side more and the nostrils are still too prominent and need to taper more at the top end. I think that will do the job- or at least that is as far as I'll be able to take this carving. I plan to sand the face to very smooth which should take care of some of the harsher lines. I know this is not much of a likeness for today, but lets say it is not bad for maybe a 50 year old. After all- wouldn't we all like to go back a few years?!

I can see a few things that still are not right.


A few days later I went back to start sanding and realized that it was far from ready for that. I picked up my gouges and once again refined the things that were not yet right. The nostrils were much too tall, for one thing, and the cheeks needed more all around shaping. This is what I ended up with earlier today: 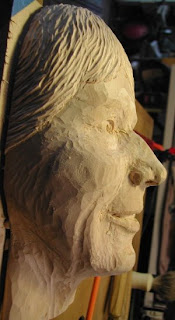 I could probably keep on working with gouges, but
I feel that this is as good as I'll be able to get this carving. I will be softening the contours with 100 grit sandpaper first, and then run through the grits from 150 to 180, 220, and maybe some 320. Then I plan to use a sanding sealer on it and when that is dry to sand with the 320 again. Maybe 400 grit too- though they say that with basswood anything over 220 is a waste of time. I find that the finer grits leave a very nicely finished surface with any type of wood, including basswood and butternut.


OK- I have no fingerprints left so I'll stop for the day. I did just half of the face so that you could see how rough it was as I started to sand. I like the looks of the sanded half- maybe not exactly a portrait of me- at any age, but a recognizable face, and a lot better than when I started. 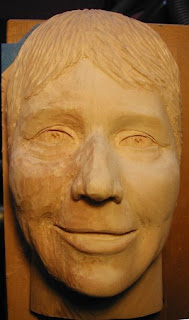 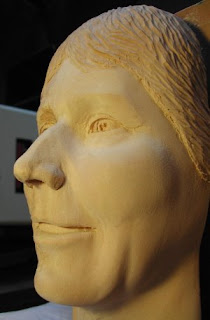